For the first time since 2018, the Federal Reserve raises interest rates by a quarter point percentage (0.25%). This took off effective March 17, 2022. Since the start of (and throughout) the pandemic, the federal fund interest rate was maintained at almost 0 percent.

Here we answer some of the common issues surrounding federal fund interest rate hike and what it will mean for you as a real estate investor:

What is the Federal Funds Interest Rate and Why Do They Matter?

In a nutshell, the federal funds interest rate (or simply fed rate) is the interest rate that banks charge each other for lending excess cash to them from their reserve balances on an overnight basis.

All financial institutions in the United States are required by law to maintain non-interest-bearing accounts at Federal Reserve Banks. Before March 2020, these accounts must have a reserve amount equal to a percentage of the bank’s total deposits. If a bank is unable to meet its required reserve, it borrows from other banks with excess cash from its reserve at the interest rate set by Federal Reserve. This interest rate is the federal funds’ interest rate.

This interest rate is used as a baseline for prime rates. Prime rates (or prime lending rates) are the prevailing interest rates that banks charge their best customers. This means that when federal rates hike, chances are prime rates will also increase. This includes bank loan interest rates, credit card interest rates, and mortgage adjustable rates, among many others.

NOTE: When the COVID-19 pandemic hit the country, the Federal Reserve decided to reduce the reserve requirement ratio to zero. The goal was to encourage banks to lend out all of their funds as a way to jump-start the economy. By eliminating the required reserve, banks can use this money to lend out to individuals and businesses, thereby stimulating the economy.

Why is the Federal Reserve Raising Interest Rates?

One word. Inflation. In February 2022, inflation reached 7.9% based on the most recent Consumer Price Index (CPI) report.

The Fed uses interest rates as either a gas pedal or a brake on the economy when needed.

It is the general responsibility of the Federal Reserve to maintain economic and financial stability. Thus, the Federal Reserve needs to get inflation under control. By under control, this means at an inflation rate of 2 percent. Too high of an inflation rate would be a burden to many American families. While too low could also weaken the economy and there would be no room left to cut interest rates to boost employment during an economic downturn. A 2 percent inflation rate would just be enough to maintain a well-functioning economy allowing households and businesses to save, borrow, and invest and thrive.

One of the ways that the Federal Reserve can lower a rising inflation rate is to increase federal fund interest rates. As fed rates increase, consequently making borrowing more expensive, consumers are expected to spend less. Demand for goods and services fall and the economy slows down a bit, bringing inflation down.

What Pushed Inflation to Go Haywire?

In 2021, we already felt a steady increase in inflation. Since the U.S. economy reopened in March 2021, we saw a spike in inflation by 1.6 percent in April which steadily increased by a few percentage points that lead to the 7.9 percent inflation rate in February 2022. 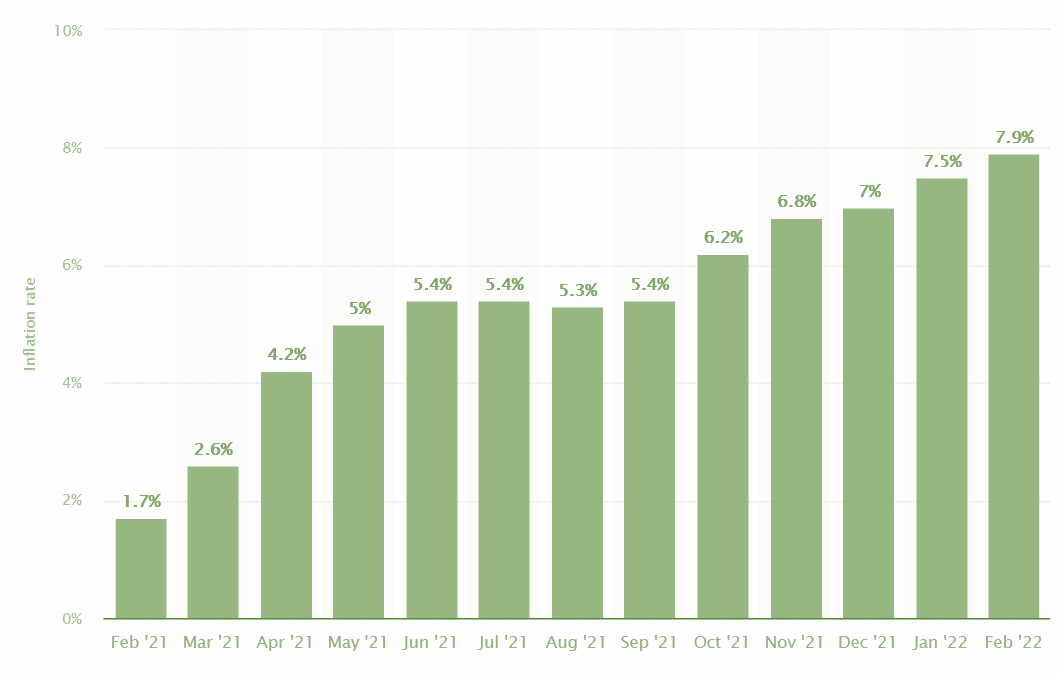 Unfortunately, while the Federal Reserve expected a breather this 2022, they encountered the opposite as supply chain challenges continue to haunt us. The Russian invasion not only magnified the increasing costs of commodities (e.g., gas, oil, wheat). But, it also caused the U.S. economic outlook to remain uncertain.

Furthermore, the new COVID outbreak in China has led to the closures of ports and factories to contain the outbreak. This can worsen the already strained supply chains.

By the end of 2022, the fed rate is expected to be between 1.75 and 2 percent. This means there will be seven more interest rate hikes for the rest of the year. Meanwhile, 2023 is forecasted to have four more interest rate increases, with a target rate of 2.8 percent.

How Will the Rising Federal Fund Interest Rates Affect You?

As mentioned earlier, the fed rates provide the baseline for prime rates. This means that if the fed rates continue to increase, borrowing would eventually become more expensive for consumers and businesses due to higher loan rates.

What Does Federal Fund Interest Rate Hike Mean for the Housing Market?

One thing is for sure. Mortgage rates will increase due to increasing fed rates. Even before the Federal Reserve announced its rate hikes, mortgage interest rates have been creeping up since December 2021. As of March 17, 2022, the 30-year-fixed mortgage rate has reached 4.16 percent, representing the highest level for mortgage rates since April 2019.

The higher mortgage rate can ultimately affect your purchasing power as a homebuyer as it will be more expensive to buy a house.

True enough, Seattle Housing Market has already been crazy the past two years, with skyrocketing home prices and bidding wars here and there.

The fed rate hike might be able to slow the demand a bit as homebuyers may become hesitant in buying now due to the rising mortgage rates. However, the low inventory of homes remains to be a big issue in Seattle. Thus, while we will probably see fewer bidding wars, the housing market in Seattle will remain competitive and continue to thrive.

That being said, we don’t see any indications of home prices going down due to the fed rate hike.

The Verdict: To Buy or Not to Buy?

Definitely, BUY, and the sooner, the better.

With the looming fed rate hikes in the next two years, it’s only a matter of time before mortgage rates would follow suit.

Home prices are also expected to rise primarily due to low inventory. The good news is that home price increases may not accelerate that fast due to the fed rate increase.

If you have been thinking about buying, whether for your first home or an investment, now is still a good time to buy. This is despite the skyrocketing home prices and the increasing mortgage rates. Real estate continues to be the safest investment out there today. For one thing, it will be cheaper to buy now than it will be in the next two to three years.

“The American economy is very strong and well-positioned to handle tighter monetary policy.”

Looking for the ideal real estate property to help you build wealth and achieve financial freedom? BricksFolios has got the right property just for you! Contact us NOW!

How can Real Estate Agents Recession-proof their career?

How can Real Estate Agents Recession-proof their career?